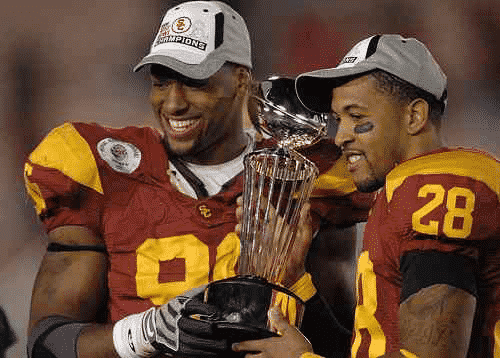 On Friday, November 10th, 2006, Lawrence Jackson was running out of time. The All-American defensive end for the USC Trojans had yet to register a sack in his junior season. Coming into the season, Jackson had his sights on a national title, a Bednarik award, and possibly a first-round pick in the coming NFL draft.

But so far? Eight games in. Zero sacks.

Jackson obsessed over it. It was all he thought about. As Jackson saw it at the time, even if he was playing well overall, without sacks, he was invisible.

But by midnight on Saturday the 11th, Jackson was the star of USC’s victory over Oregon—a nationally televised, primetime game with major implications on bowl bids. He accumulated three sacks, ten tackles, and one tackle for a loss—a landmark game by any standard.

So what changed in a mere 36 hours?

His approach to the game.

The morning of the game, Coach Pete Carroll gave Jackson a short book to read called The Inner Game of Tennis, a classic of sports psychology written by Timothy Gallwey in 1974. Jackson devoured the book the afternoon before the game, and it was the turning point of his season.

When I heard about Gallwey’s book from Coach Carroll at USC, I had to know more. Five years and seven re-readings later, I find myself coming back to these techniques in times of intense activity.

So what are the principles that turned Jackson’s season around, and have been used by elite athletes from all sports to play their best?

There are three, the first of which we’ll focus on in this post: focus, trust, and nonjudgmental awareness.

This post, and The Inner Game, is about how we bring these three elements to the “court” of our own lives.

First, the foundational concept of Gallwey’s work: a quick introduction to the “two selves.” Onward and inward.

Have you ever done something and then immediately afterward wondered, ‘how did I do that?’ Somehow, you magically picked up a skill. Maybe it was osmosis, but suddenly you can break dance with the best of them. (Or maybe not.)

Gallwey describes us each as having two selves, Self 1 and Self 2. Self 1 is the rational, conscious mind. It’s our thinker, analyzer, problem solver. It’s our go-to resource for deconstructing problems. Self 2 is the subconscious, or the part of ourselves where the “mind-body” union occurs.

As Gallwey himself puts it, “one could say that within each player there are two ‘selves.’ One, the ‘I,’ seems to give instructions; the other, ‘myself,’ seems to perform the action…call the ‘teller’ Self 1 and the ‘doer’ Self 2.”

Self 1 is the mind as we usually know it. It is the frustrated, churning, questioning mind. It is the the part of us that agonizes over a loss, that searches incessantly for an answer to an infuriating failure. While amazingly useful, Self 1 is not, and can’t be, the Self that delivers high performance. That can only be Self 2, the doer.

Self 2 is the you that is bigger than your conscious mind. It is the part of you that has intuition, that thinks faster than conscious thought, that acts. Self 2 is the young boy who discovers he can run, FAST, and marvels at discovering his speed. It’s the part of a dancer who automatically corrects a move by practicing in front of a mirror. It is the pure spirit that seeks to explore by doing, to see what happens. Without judgment. Just because it can.

The relationship each of us has between the “teller” and the “doer” is a prime factor in determining our ability to translate knowledge into effective action. The more we are able to play from Self 2—without the interference of Self 1—the more we perform at high levels.

Power in the moment is the only real power we have. We are only able to take action right now. Everything else is an illusion, a derivative, beyond our influence.

Focus is the basis of all successful endeavor. Focus determines attention, and what we pay attention to determines how we perform. What we focus on expands, so it stands to reason that the more we focus on what matters, the more likely we are to successfully achieve the outcome we desire.

My favorite thing about focus? It can be learned and turned into a huge competitive advantage, for free.

A charged, negative thought is a hijacker ready to take over your mind. How many times has something like the following happened to you?

I’m in a meeting, and the person I’m meeting with makes an offhand remark, ever so casually, about how my approach to a problem was all wrong. No credit for what I have delivered, no recognition of my effort. Just making me feel stupid. Great, now she thinks I’m an idiot. Why did she say that? Is there something wrong with my work? There is. I keep fucking this up. Dammit. Stupid! No wonder she’s always talking down to me. Did her parents not love her or something? God, what a jerk. I can’t stand this.

It’s a runaway train. An entire conversation, full of judgments about the other person with no real basis. A charged, emotional reaction to a single stimulus. Minutes go by and I would not be present at all—I’d be completely off somewhere in my mind and contributing nothing, not moving forward. How unfair to the people I was with. How distracting. How unhelpful.

This is what first convinced me to dabble in meditation. Talking about meditation here in the US is a great way to get weird, distrusting looks. It’s looked upon as strange, despite existing thousands of years longer than most things considered “normal” in our culture. Whatever normal means, anyway.

When I started, sitting still for 15 minutes was painful, a ripping of the fabric of my attention. But that’s the point: meditating, at its core, is just a practice in controlling where your attention goes. With practice, an entire train of thought is nipped in the bud before it can hijack you. I’ve learned to recognize what the first thought in a negative sequence feels like, and to reactively dismiss it as “not useful” before it takes hold of my mind.

I started by doing NSR meditation, and have dabbled with other versions also. But it doesn’t really matter which you do. If you do any of them and make it a habit, you will benefit.

Turn down the noise

We all need a little help turning down the noise of the modern world. There is a never-ending amount of stimuli that loves nothing more than to take over our attention.

Naval calls this going through “the loop”—checking email, Twitter, Facebook, etc—and most people go through this loop 10+ times per day, for at least 10 minutes per. That’s 100+ minutes of focus destroyed per day.

I use a few tricks to turn down the noise.

I feel the pull of the loop. I get it. I want to check Facebook (even though it’s the same content in my news feed every time), and my Twitter replies, and check my email. I want to feel like I know what’s going on.

The balance I’ve taken to is batching all of this into three sessions per day: one in the morning, one at lunch, and one at the end of the day. This opens up a lot of time in between and enables other, more drastic practices.

Most of what I read is crap, and many of the things I pay attention to aren’t actually worth my attention. So:

When I’m working on my laptop but still need Internet access, I use SelfControl to block myself from accessing the sites that are my gateway drugs to the loop. If I need complete focus—such as writing, idea generation, or anything that can be done without the web—I use Freedom to disable the web completely. It’s temporary, and incredibly freeing— but only because I can legitimately tell myself that I’ll get to the loop later in the day.

I also suggest putting your phone away or on airplane mode when you’re trying to do real work. Putting the phone on vibrate and leaving it on the table is just as distracting as leaving it on ring, so just get rid of it.